The Saga of installing a Solid State Drive (SSD)

My Acer Laptop was starting to regularly give me the "Blue Screen of Death" (BSOD) which is what Windows computers display after they've irrevocably crashed, in order to show what the problems was that caused the crash.

Every time it crashed, the problem was caused by a file called iastore.sys

There was an enormous amount of advice. Some said it was a problem with the Master Boot Record.

Some said that iaStor.sys was the driver for Intel Matrix Storage Manager which needed to be updated.

Others talked about doing a Startup Repair

Some of the forums said that the fault was caused by the TDSS Rootkit, which could be removed using Kapersky's TDSSKiller utility

For me, virus scans came up blank, Kapersky found no rootkits. Resetting the Master Boot Record was ineffective. The Blue Screens of Death continued, usually when the computer was left idle for a while, but occcasionally when I was in the middle of something. This problem also coincided with file problems, like an inability to delete certain folders, and the internet browser freezing for no apparent reason. 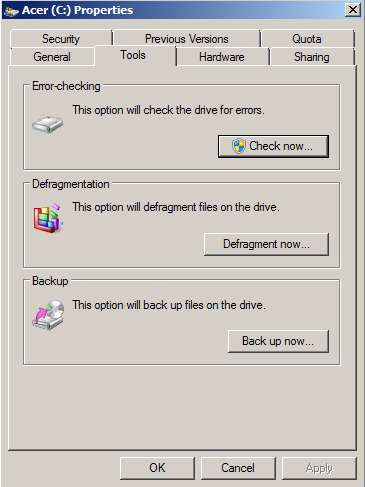 I suspected the hard drive, so I did an error scan. From My Computer, right click on the hard-drive and choose Properties. Then choose the Tools tab and click on Error Checking. But the Blue Screen of Death would come every time I ran the scan.

I couldn't be absolutely sure that the fault was caused by the hard drive, but I'd tried everything else suggested in the forums. So I decided to purchase a new hard drive.

Lured by the promise of stunning performance and amazingly fast boot times, I spent the four times the cost of a normal 500 gigabyte hard drive on a Solid State Drive (SSD).

I chose the Samsung SSD 840 Series drive with a capacity of 500 gigabytes.

There was a very helpful video on YouTube which showed me exactly how to open my Acer 5745G. The actual video was about an Acer 5742z, but it was close enough to show me what to do.

But before I could install the new drive, I had to have a way to image the new drive. So from Jaycar Electronics at Hornsby, I bought an external enclosure for a two and a half inch SATA drive that would plug directly into a USB port. And it was only $19.95.

I connected the Solid State Drive (SSD) to the USB and Windows had no problem seeing the drive as a blank drive.

Copying the Existing Drive to the New SSD

The Samsung SSD even came with software utility to clone the existing drive to the new SSD.

It took a couple of hours, but eventually it came to the end and ... then an error message, saying that the operation had failed. No error codes. Nothing to tell me what had gone wrong or how to fix it. It just hadn't worked.

So I tried it again. Same result.

A couple of weeks earlier, I'd made an image to an external hard drive using Snapshot drive imaging software.

So using another computer, I restored the disc image from my external hard drive to my new SSD connected via USB.

This took about four hours, but at least this time the result was successful.

I took the SSD and installed it into my Acer Laptop and hit the power button.

The operating system was there, but the computer would not boot from it.

After Googling "cloned drive computer won't boot" and finding many people with the same problem, I had high hopes of finding a solution. But the relatively simple fixes for the boot manager didn't work, and the very complicated command-line solutions were beyond me.

So I booted from the Installer disc and went through to the Repair utility.

Again, it didn't tell me why it failed, or what I could do to make it work. It just failed.

After days of trying to get this SSD to boot, I gave up and decided to get help.

I called one of those companies that offers to send a computer technician to your house. He was booked in for eight o'clock the next morning.

The young man who turned up, was exceedingly punctual, arriving exactly at eight o'clock. He seemed knowledgeable and got to work trying to make my computer boot.

Eventually, when he failed to get it going, he decided to take my laptop away and use some cloning software of his own to clone the original drive to the SSD. This was on Friday.

On Monday, I found that he'd made three attempts with three different cloning software. But each attempt had failed.

We agreed that if he couldn't get the existing hard-drive clone to work, a clean-install would be a reasonable compromise. I said at the time that I was concerned that he didn't have my product key for Windows 7 Professional, and I wanted to ensure that I had legitimate operating system software on my computer. He said not to worry and that he would sort it all out.

First Experience with the SSD - invalid operating system on board.

So the computer came back. And it came out of hibernation very quickly. Everything seemed to work well.

It was only after the technician had gone that I discovered that he hadn't installed Windows 7 Professional, which is what I had a license for, but Windows 7 Ultimate.

Three days later, an ominous message appeared in the bottom right-hand corner of my desktop telling me that my copy of Windows 7 was not genuine. If the desktop was covered, a small pop-up would regularly remind me that I was using invalid software and to "click here" to fix the problem. This problem would be fixed by me paying Microsoft for a license I already had.

I sent an email and made a phone call to the company that sent the technician to me, telling them that fixing my problem by installing an invalid copy of Windows was not an acceptable solution. They agreed, and so they arranged to have another technician come on the next day to fix the problem.

One more try with cloning

Meanwhile, I thought I'd give it one more go myself.

What the Samsung utility had done was format the SSD and copy only the C: drive. What it had failed to do was to copy the hidden system partition.

If you Right-click on My Computer and choose Manage it will open the Computer Management utility.

In my example, you will see that I've partitioned the drive so that I keep my data completely separate in the D: drive from my operating system and programs in the C: drive

However, during the clean-installation of Windows 7 Ultimate, the System Reserved partition was created automatically.

At this point I wondered if I tried restoring my own image of my C: drive which I'd made using Snapshot, while leaving the System Reserved partition in place, whether magic would happen and I'd have my old computer back.

First thing next morning, I re-installed the SSD into the Acer laptop. I was becoming quite adept at removing and installing drives by now.

I closed the back of the case, turned over the laptop and pressed the Power button.

And then magic happened.

I had my old computer back. Everything working as it should. And at the time of writing this, nearly a week after the successful installation, no Blue Screens of Death.

The computer boots and responds much faster than when it was brand new. File commands are executed immediately without the characteristic pause while the hard drive engages itself. Fragmentation is a thing of the past. Booting and hibernation are considerably faster.

The results of having a Solid State Drive to replace the original drive made it worthwhile doing, but think again if you believe that installation and cloning of an existing system are straightforward and quick operations. I came very close to giving up, but I'm glad I persevered.